All You Need to Know About WCGC, from its Meaning and Origin to Participation

You might have already caught bits and fragments of the buzz around the World Corporate Golf Challenge or WCGC. So, do you know what it is and how you can be a part of this prestigious tournament?

Don’t worry! We are here to share all you must know about WCGC. Let’s begin with the basics:

What is the World Corporate Golf Challenge?

On the 25th Anniversary of WCGC in 2018, José Guerra (the Chairman of World Corporate Golf Challenge) mentioned in his message:

“The WCGC is one of the largest and most successful golf events for companies to take part in around the world.”

World Corporate Golf Challenge (or WCGC) is the biggest international amateur Golf tournament in the World. As is clear by the name, corporates from around the World participate in this tournament to win the title and also to build their network.

National teams represent their countries as well as a brand or business organization. The idea was to grow their network over having fun.

In short, whether a company wins this golf tournament or not, there is always a lot more to gain. This is what makes WCGC even more special and that is why the corporate sector is so enamored by this challenge.

Let us try to answer these questions in the next segment. Here is what the records tell us:

John Mitchell observed that golf and business, when put together, go hand in hand. He also noticed that Corporates organized golf days for the top clients. He used this knowledge to set up a golf tournament with the intention to host an event that “provided the perfect environment for participating companies to develop their relationships with staff, customers, suppliers, and partners”. (— José Guerra)

After a lot of hard work, he launched the UK’s The Times Corporate Golf Challenge. He used this name because the event was backed by the most prestigious newspaper in the UK, The Times. One of the reasons for the popularity of The event was the fact that The Times was the official media partner of the event.

When the popularity of the event and its concept crossed International borders in 1997. The event was given a new identity and it emerged as the World Corporate Golf Challenge.

John Mitchell joined hands with the top print and broadcast media channels to further grow the profile of WCGC. This, in turn, generated commercial and sponsorship value.

With strong media and marketing support (after Netco Group bought the majority shareholding in WCGC in 2007), the popularity of the event grew multi folds. As per the data shared in the year 2018, there were:

World Corporate Golf Challenge is a widely-popular event and its success was quite apparent right from the beginning. However, this popularity raised a fair share of challenges and problems for the event managers and organizers.

A total of 15 countries were represented at the first World Final of WCGC and this number kept going up year by year. Naturally, these growing numbers caused several problems for the organizers.

Let us give you an example. More than 5,600 players participated in the first edition of the game in the UK. This was before the game even reached other nations. Now, you can get a better idea about the multitude of problems that were caused by the magnitude of the event.

There were a lot of problems and smart solutions were sought to tackle these problems. The two problems that were among the top concerns were:

While the tournament was limited to the UK, organizing it was simple. However, with its growing popularity all over the world, it wasn’t easy for one organization to manage and organize qualifier rounds among Corporates in different countries.

Therefore, a simple solution appeared in the form of appointing licensees to organize qualifier rounds and tournaments within these countries with the aim to send the selected players to WCGC for the international tournament.

This not only reduced the burden on the main event organizers but also saved a lot of time and resources for the participating companies. It is because these companies didn’t have to bear the travel and stay expenses of their employees just for the qualifiers round.

The licensees can employ their own methods to choose their annual national winner to compete in the annual WCGC Final against other nations.

The second problem was the inability to include more countries due to the time it took to conduct the event because there were many participating teams and each team had 4 players. Because of this, it was becoming difficult to expand the horizon of this game to include other countries.

The solution to this problem came with the introduction of the “Two-Player Team Competition”. It means that the number of players in a team was reduced to 2. Now, this revised format allowed scope for global expansion without affecting the camaraderie of team play.

How to Participate in the World Corporate Golf Challenge?

If you want your company to be a part of the World Corporate Golf Challenge, feel free to reach out to us because White Eagle Sports is the licensee of WCGC in the UAE.

About White Eagle FZCO
White Eagle FZCO , one of the leading golf event management company founded in 2020. The Dubai-based company’s vison is to build a multisport platform, creating once-in-a-lifetime experiences for both amateurs and professional athletes. 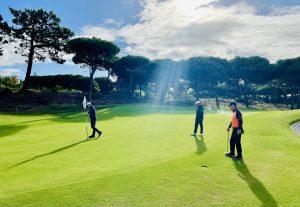 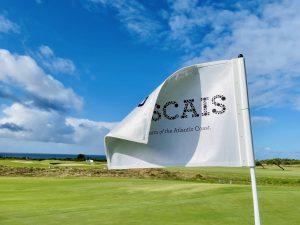 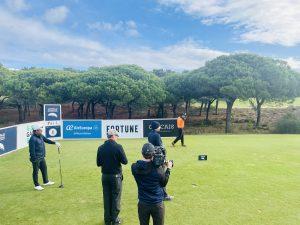 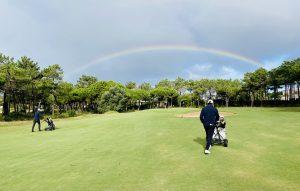 All About Tiger Woods: The Living Legend Who Changed Golf

🔸 Making Classics Even Better 🔸Check our

‘The most important shot in golf is the next one

Golf is more than an activity…it’s a feeling!

Golf is a unique sport, unlike any other out there

‘They say golf is like life, but don’t believe

Top 5 reasons why everyone should play GOLF: ⛳

The winning combination of sustainability and soph

Golf is not, on the whole, a game for realists - B

⛳ Welcome to Duca del Cosma! ~ The next generati

Golf in Dubai. Come, play and shop. Buy your the b

Be stylish. Play your best golf wearing the most c

Golf in Dubai ⛳️ One of the most visited dest